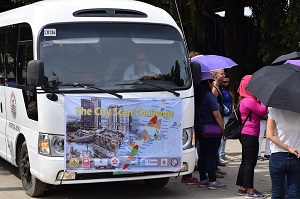 The ‘International City Climatescan’, which raises awareness of climate adaptation in cities, has proven effective. This practical, action-oriented method, for identifying climate challenges in cities has been implemented globally and was presented at the international conference on ‘Resilient & Responsible Architecture & Urbanism’ on 11 April. The climate scan will be performed in the near future in the Netherlands, Poland, Indonesia and the Philippines. Tauw made an important contribution to its establishment.

The changing climate affects the living environment in our cities. A well-known example is heavier precipitation resulting in floods. However, climate change also affects air and water quality, and rising temperatures in cities may cause heatstress. It is important that all stakeholders are aware of these climatechange related challenges.

In the Netherlands, the so-called ‘analyze, ambition, act' adaptation strategy is often applied. The first step - knowledge - often involves stress tests. In the coming two years all municipalities in the Netherlands must perform a stress test to identify bottlenecks in areas such as flooding, draught, and heat.

At the end of 2017, following various international exploratory city scans including in the megacity Metro Manila, the international City Climatescan in Rotterdam was set up in order to put the necessary steps in place to go from ‘analyze' to ‘action’. During a scan, an international team works together in a ‘triple helix’ composition (governments, companies, and knowledge and educational institutions, including young professionals and students) for a short period of time, during which the status of a municipality’s climate adaptation is assessed with various stakeholders and tangible measurements and results.

Resilience in urban areas or neighbourhoods

The ability to gather relevant information and measurement data in a short time frame about the level of resilience at street or urban area level makes the climate scan unique. This knowledge may help citizens and other stakeholders in urban areas or neighbourhoods to develop support for, and implement, climate adaption measures. The participating parties worked together to select a variety of challenges for the Rotterdam City Climatescan: risk of flooding, heat stress, water quality (micro pollutants in surface water and plastic waste), and air quality.

The Rotterdam City Climate Scan was a joint initiative by the Rotterdam University of Applied Sciences, the Hanze University of Applied Sciences and Wróblewska Technical University in Gdansk, with Ignace van Campenhout and colleagues of the Urban Development Department of the city of Rotterdam taking the role of client. The climate scan was possible thanks to the collaboration of the Netherlands Water Partnership (NWP), CityDeal, TNO, Tauw, Climate Cafe, INDYMO, and the international INXCES and WaterCoG projects. Representatives from each organisation along with 60 students carried out the City Climatescan in Rotterdam.

The updated methodology and the results will be presented at the Adaptation Futures Conference in Cape Town in June 2018, which will also see the launch of the Global Centre of Excellence on Climate Adaptation. Moreover, various tools that Tauw helped to develop, such as heatstress maps and the climate scan will be demonstrated.